We have attempted to assemble a coaching staff that would be considered elite by any region in the country, in the attempt to truly educate young players about the game.  We strongly believe in a "practice more, compete less" model, and we encourage our players to compete in other sports, as we did.  We understand the value that playing additional sports provides for athletes, and we also understand that having opportunities to practice and compete in lacrosse year-round will help players grow their skill level at a faster pace.

Above all, we are focused on building character with our young players.  We have seen many talented players reach the top talent-wise, only to fall short of their goals due to bad decisions or academic failure.  We will do our best to educate our players as to both on and off the field decision making.

“My focus in starting this program is to make an attempt at passing along the invaluable lessons I have learned over a twenty-year playing career from some of the greatest coaches in the game and give back to the sport of lacrosse. The most important lesson has been: be a good person first and a good player second. I will do my very best to pass that on." 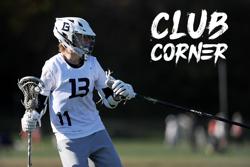